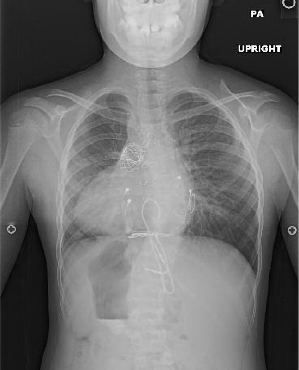 Due to your generous support, we have received the first portion of our match and we are over halfway to our goal! Thank you so much!

It is often said that a picture is worth a thousand words; a snapshot of a much larger story. The photo on the left gives just a glimpse into Bennett’s story. (If you are on the mobile site, the photo will unfortunately not show.) This X-ray was taken earlier this year to assess the progression of Bennett’s scoliosis. However, scoliosis is just one small piece in the larger puzzle of Bennett’s health. You can see Bennett’s artificial pulmonary valve, the area which looks like wire mesh at the top of his heart in the X-ray. In the center, you see pacing wires placed during Bennett’s fourth open heart surgery in 2011 because it was believed that he would eventually need a pacemaker. Since these leads are screwed into his cardiac tissue, they remain today although he has not yet required a pacemaker.

As you may know, in addition to serving on the Family Advisory Council, Valerie serves on a leadership development board at Children’s Healthcare of Atlanta known as Emerging Leaders for Children’s (ELC). ELC has the purpose of raising awareness and funds for one of the nation’s largest pediatric healthcare systems. This year, ELC has chosen the Children’s Heart and Research Outcomes Center (HeRO) as the beneficiary of its efforts.

Led by Mike Davis, Ph.D., HeRO brings together innovators in pediatric healthcare, biomedical engineering and clinical research to develop the next generation of pediatric-specific therapies for congenital heart defects. Through intense collaboration, leaders from the Children’s Healthcare of Atlanta Sibley Heart Center, Georgia Tech and Emory University are addressing congenital heart defects, the most prevalent pediatric condition in the country. HeRO’s work is truly groundbreaking and ELC is honored to help advance two of HeRO’s most promising studies:

• HeRO’s pediatric biological pacemaker recently won Emory University’s “Invention of the Year” Award and is closer than ever to reaching children in need. ELC’s support for this project will provide critical funding for the final stage of the study before FDA submission.

• HeRO has pioneered a way to predict stem cell therapy outcomes through statistical modeling that has the power to determine whether a stem cell will work before a child is treated. ELC funding will support hiring two trainees, costs associated with server space and usage, and supplies for confirmation tests.

Both of these studies have the potential to significantly impact children with heart defects similar to Bennett’s. We are eager to see how these research projects will change the treatment of cardiac defects for children not only in Atlanta, but around the world. In order to accelerate the timeline for the biological pacemaker, we have a match for all funds given by our friends and family up to $50,000. This total of $100,000 would enable the biological pacemaker study to begin testing the pediatric biological pacemakers in an animal model of human heart disease.

Bennett has received excellent care over the past eleven years and is doing far better than we ever let ourselves imagine. He has endured five cardiothoracic surgeries and dozens of other surgeries and procedures. He has received cutting edge treatments and therapies throughout this time. We are excited to see how cardiac treatments will continue to evolve in the years to come. We would like to invite you to join us in supporting these studies.

Please let us know if you have any questions or would like further information. We would welcome the opportunity to share more about these exciting initiatives. We are hopeful to reach our goal during the month of February. Thank you in advance for partnering with us!