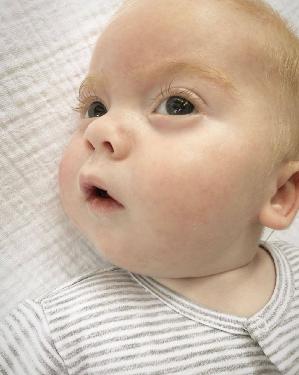 We were so relieved when our baby was finally given a clear diagnosis. Unfortunately, it was that of a rare and terminal syndrome.

Yes, we are devastated. Yes, we are mourning the loss of our child daily. Yes, we would do anything possible to change the circumstances. It may seem inconceivable to find relief in such a diagnosis, but it finally gave us some answers.

After an amazingly easy pregnancy, Amy had Atlas at 11:49pm on October 1, 2017. We should have known that after 9+ months of everyone saying we were so lucky that Amy wasn’t sick, too tired, etc. things were too good to be true. After an extremely long and traumatic labor, Atlas was taken to NICU at Piedmont Hospital. At that point, we didn’t expect anything to be seriously wrong-just routine monitoring for sepsis due to meconium in his lungs. However, things changed quickly when our doctors became suspicious that something bigger was going on with our baby boy. We ran every test imaginable, and learned that Atlas had several issues-congential cataracts, moderate hearing loss, agenesis of the corpus callosum, feeding issues, the list goes on… However, the doctors weren’t too worried about the prognosis. We all just wanted to get Atlas home, and ready for his various specialty follow ups.

On October 26th, Atlas was finally able to come home, and we felt like we were able to start our life as a family. Putting Atlas in his own clothes, giving him a bath in an actual bathtub- these suddenly felt like luxuries. While Atlas did have an NG tube for feeding issues, this became our new normal, and we learned to adjust. It was surreal, but completely manageable.

One month after Atlas came home, our night nurse woke us up in the middle of the night to let us know that Atlas had a fever of 102.6 degrees Fahrenheit. As he was less than two months old at the time, this was a very big deal. A 1am trip to the ER began our two month saga of continuous hospital care, lab tests, X-rays, tears. In the hospital for what turned out to be a UTI (after full spinal tap and workup)…out for several days…in for what was thought to be a stomach bug… out for a week…in for continued throwing up and placement of an NJ tube…out for two days. Then the big hospital visit happened that changed everything.

On December 18th, after being discharged from the hospital two days prior, Atlas went to a previously scheduled therapy appointment. His therapist was immediately concerned about his labored breathing. After hooking him up to a PulseOx, we found out that he was only at about 77% oxygen saturation. We immediately rushed to the emergency room, where CHOA’s incredible pulmonary team made sure Atlas was a priority and admitted us to their care. Over the course of the five week stay that followed, Atlas had a full work-up: ENT scope, circumcision, tubes placed in his ears, GJ tube placed in his stomach/intestine, heart echo, MRI, swallow study, upper GI exam, renal ultrasounds, chest X-rays, urinalysis, thyroid tests, countless blood draws. It was during this stay that we also asked to loop in genetics. While the NICU at Piedmont had run a microray that showed everything to be normal, we knew there had to be a bigger picture. Atlas had way too many things going on for it not to be connected in some way. We were initially told not to have high expectations; only about 36% of children that are suspected to have some sort of genetic issue are ever actually diagnosed. By the next morning Atlas’ (presumed) diagnosis was in his chart; our precious baby boy has Vici Syndrome. While it was only suspected that day, the genetic confirmation we received over a month later was some of the best news we could have received at that point.

It turns out the geneticist we met with is probably the only person in Atlanta to ever even have heard about this extremely rare syndrome. There are only about 60 cases ever recorded in history worldwide, and it was only discovered thirty years ago. The syndrome comes with a terminal prognosis, with most of the children passing away from their immunodeficiency, cardiomyopathy, or a combination of the two. While we are completely devastated, we were also so grateful to finally have an answer, a general path to expect. The four months we spent with no answer were the worst in our lives. With a diagnosis, we were finally able to enjoy our time with Atlas, and not be so focused on back to back doctors' appointments, therapies, tests. We now know that we can utilize IVF with PGD for future children, and won’t be gambling with their health. We’ve connected with families who had more children before finding out their kids had Vici. Some of them have had the unfortunate chance to have second kids with the genetic disorder. We feel so lucky to have the knowledge that we do. Hospice was looped in, and our incredible team was meeting with us weekly, walking us through everything, providing the most amazing insight into this world we never thought we’d find ourselves being a part of.

Atlas ultimately ended up passing away peacefully at home on June 17, 2018, as a result of kidney failure.

We are so happy to have chosen Atlas’ name before meeting him. Atlas is notorious for holding the weight of the heavens. We chose this name partly to honor all of our angels in heaven. How ironic that we chose the name of the strongest titan in Greek mythology for our son, who is weak in so many (physical) ways. He has more than made up for it in so many aspects. We are so appreciative of what he teaches us every single day.

Because Atlas had so many different health-related issues, we have decided to direct donations to palliative care, rather than a specific medical branch. After we learned that it was suspected that Atlas had Vici Syndrome, our palliative care and hospice teams have been the glue holding us together. They’ve had to endure the truly hard conversations about Atlas’ DNR, funeral plans, etc. We are eternally grateful, and will never forget them. We have named an area at the new Center for Advanced Pediatrics after Atlas, with plans to do the same at the future North Druid Hills campus.

Thank you so much for contributing to our AtlasStrong efforts. We are so determined to turn our devastating situation into a positive and benefit future patients at CHOA in honor of our sweet angel baby.