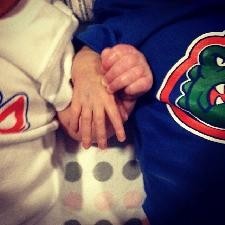 The Fourth Annual Brunch for Babies will be held on November 5th, from 11 am to 1 pm, at 5825 Mitchell Rd., Sandy Springs, GA 30328.  Brunch will be served and there will also be an amazing restaurant raffle.  Please consider making a donation here or through Venmo @Jodi-Kalson. All proceeds will go to the Children’s Healthcare of Atlanta NICU.

Supporting children's hospitals, and specifcally NICUs, is very important to me. I originally began fundraising for the Children's Hospital of Philadelphia NICU back in 2014 in memory of my daughter, Harley. After moving to Atlanta in 2016, I decided I wanted to do something in support of the local children's hospital NICU.

Harley was so strong and overcame many great obstacles in her short life. She made a tremendous impact on everyone she met and she continues to make an impact on those who hear her story. She will forever be in my heart and I will love her forever.

I would appreciate any donations, big or small, to honor Harley's memory. All donations will go toward helping babies and NICU families in need at CHOA.

For more about Harley's story, please go to www.jodikalson.com.   Thank you for your support.  Your contribution is greatly appreciated.